How many countries would be in Africa today if Europeans had not made the artificial boundaries?

Africa has always been the last STOP OR TERMINUS for all European powers; for over four thousand years-ancient powers before Europeans-Assyrians, Media/Persian, Babylonians, Greece, and Rome continuously made Africa a focal point for their survival-economically, politically, militarily and otherwise.

have never stopped coming to Africa; in fact, their visits over the centuries extended their political bases, engendered exploration to South Atlantic, journey that brought Portuguese to West Africa in mid 15th century.

Success stories from Portuguese exploreres encouraged other European brothers; soon adventure into the sea became very lucrative; more important, discovery of lands and territories added power, wealth, glory to home country, the development that encouraged other nations ventired into the seas. Soon voyages became competitive a sport among European nations; a sport that went for centuries; while it was fun and happiness to Europeans, it later turned pains and cry for Africa. For another four hundred years, Africa was disoriented, dislocated, and perhaps, disorganized.

The rush for gold, ivory, Gum Arabic, and slaves, previously supplied by Arabian middlemen to Europeans resulted in a mad rush to Africa; and by the 16th and 17th centuries-West Africa, Congo Basin/Great Lake region of East Africa and Southern Africa region had become territories various European powers had influence and control over; the control that lasted for decades, decades into centuries; by which Africa was outrightly partitioned among European powers in 1885 in the city of Berlin without their consent.

If Africa had not been colonized, there is no doubt, African history, African political system, its religion, and modern day states or nations would have been much different from what we have.

This was Africa before Europeans arrival in the 15th century: 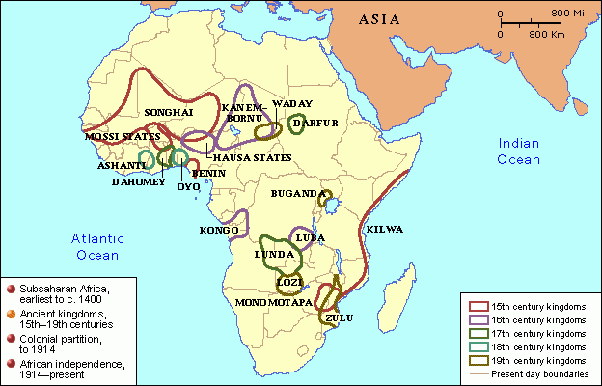 Africa in the 16th Century-At the Beginning of Europeans’ Arrival: 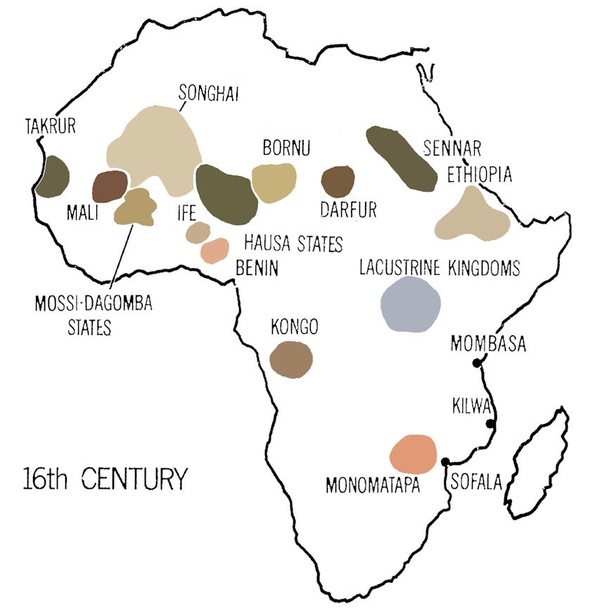 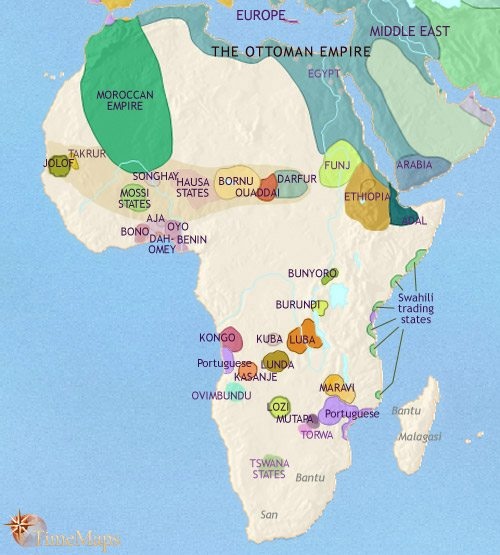 Africa in 18th Century and Beyond

Europe for centuries remained both regional and later a global power; even with political and geographical changes over the centuries, changes that were both positive and negative; regardless, Europe transformed from feudal Europe into industrial and democratically run society after reformation.

However, Africa would have been culturally protected, politically unattached or free from Eurocentric ideology, economically buoyant, and religiously neutral from east-west religious divide, were it not for colonization.

If Africa had not been colonized, it would have looked more like Asia nations, whose political identities reflect local culture and system.

More important, if Africa had not been colonized, there would have been many more countries on the continent-homogeneous nations; countries with people of same origin and ancestry; people with similar cultures, social systems, from which lasting political culture and institutions would have been built, rather than foreign imposed system without bearing to Africa. The political dislocation caused by European interference affected African internal political systems; caused cultural shock,which Africa has never recovered from; also, colonization resulted in economic plunder till this day; plus the introduction of foreign religions, which has become a major fault lines to African unity and development.

More important, without colonization, there would have been over hundred nations from yesterday kingdoms and empires in West Africa alone, the geographical region popularly called the “Bulge of Africa”; among these kingdom and empires would have been: 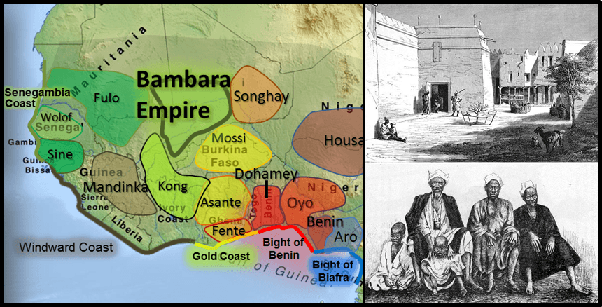 Perhaps, West Africa political map would have been much like this, and countries would have been created from previous kingdoms and empires, instead of lumping unrelated nationalities as were done in Berlin for political and economic interests of each European nation. 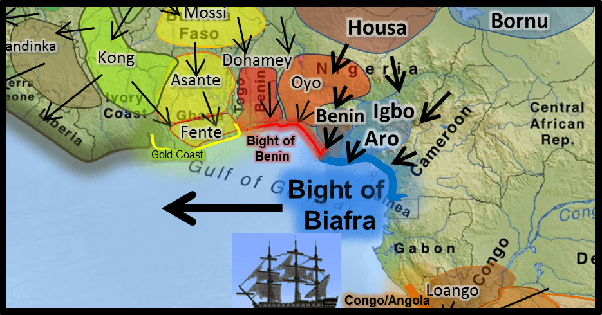 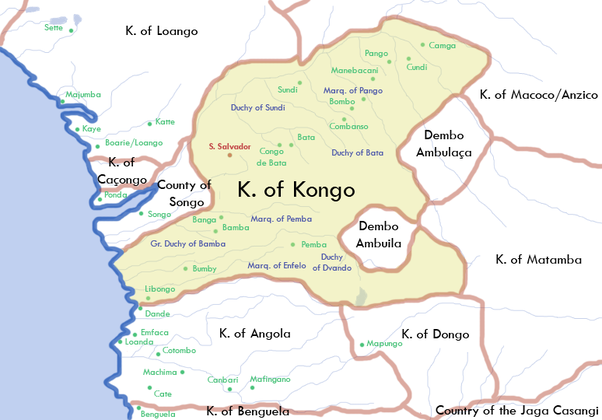 Without colonization, Central Africa, which is always referred to as Geological Garden of Africa, in terms of its stupendous wealth, mineral resources and great flora, African Amazon would have had more than Central African Republic, Democratic Republic of Congo, Congo Brazzaville, Cameroon, and Angola.

In fact, these ancient empires and kingdoms might have given birth to these nation-states in the Central Africa Region:

It would have been another story completely from what we have in a place like Congo Democratic Republic; perhaps, over ten million Congolese, King Leopold 11, killed to take possession of Congolese wouldn’t have happened. The sorry state of Congo that has never known peace since 1962-when Patrice Lumumba was killed wouldn’t have occurred. The constant fight in Shaba Province wouldn’t have arisen. The every time assassination, military coup in Congo wouldn’t have taken place.

The situation in Central African Republic, which at a time had a leader such as Jean-Bedel Bokassa wouldn’t have happened.

More important, nations or countries occupying the territorial space by just five countries as of today wouldn’t be. There are would have been more nations from Bantu speaking peoples. 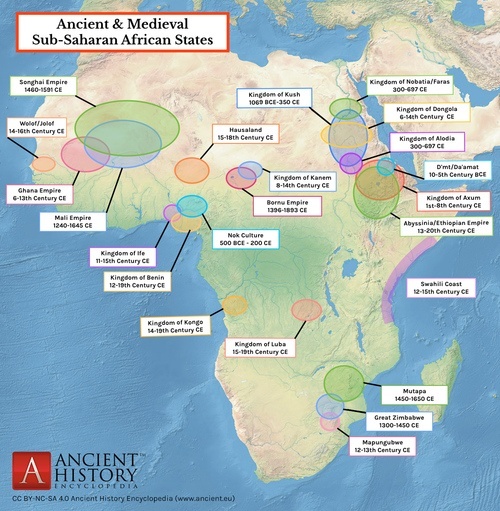 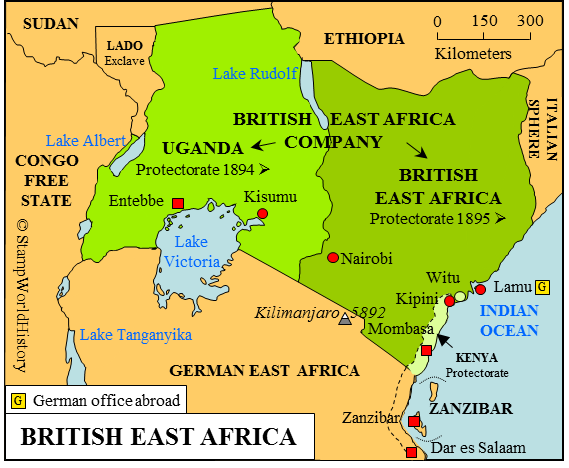 East Africa is a home to many ancient empires and kingdoms; more important, the homeland of many Bantu societies; some that had ceased to exist, but quite significant transformed over the years, which are today part of seven East African countries of: Kenya, Uganda, Tanzania, Burundi, Rwanda, Malawi (Nyasaland).

If no colonization in the East Africa, there wouldn’t be any attempt by British to form or create a three-union-state: Kenya, Tanzania and Uganda, which sparked outrage and condemnation from individuals like Jombo Kenyatta, who established the first monthly Kikiyu-language newspaper, Mwigithania; “He who brings Together.”

If colonization had not happened, probably, these could be nation-states from East African region: 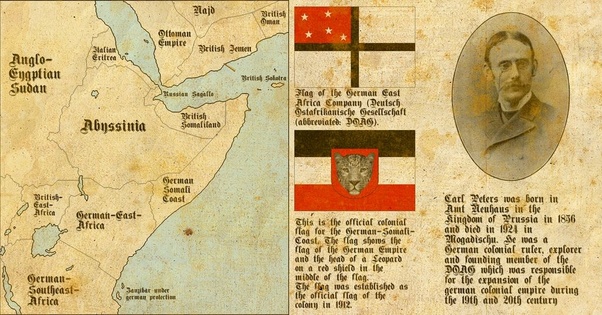 In the Southern region of Africa a lot former empires coalesced into countries as designed by different colonial masters, lands such as: Zambia, Zimbabwe, Mozambique, Namibia, and South Africa were from:

Arguably one of the greatest philosophical nationalist leaders to ever emerge from the continent, Amílcar

A stepmother of a 14-year-old boy in the populated town of Brikama Njambai, some 35.3